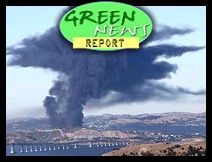 Hey Brad, OT. I just back from a trip to Stockbridge MA and met a cool yungun on the street while smoking ciggs together.....well anyway, I told him to read the Brad Blog. And I noticed, he went back to an older generation man, and as I walked by pointed to me me and said there she is. Of coarse since he was bright and an "unabashed liberal" I told him I was an election integrity activist and told him to check out your blog. Lets see if he shows up!

Oh yeah, there's this too:

We thought we had more time. Sadly, the latest reports are saying that we may have just days to stop Russian prosecutors from pursuing the outrageous charges against feminist punk band, Pussy Riot. They are seeking a lesser 3-year sentence against the band, but let's be clear - three years are three too many.

These young women are in serious danger of being shipped off to a labor camp, where they risk both physical and sexual abuse. There is no time to lose.

We need your help to convince Russian prosecutors to drop the charges against the band. Even if you’ve already taken action, please send a message now. Say it loud, say it proud: Free Pussy Riot!

The Pussy Riot trial began in Moscow on Monday. Three young women charged with "hooliganism" now face up to seven years' imprisonment. Why? Because their punk rock band gave a politically charged and impromptu performance poking fun at President Putin at a cathedral.

But don't judge these women too harshly. At least that's what Putin said himself in a stunning statement Thursday: "There is nothing good in what they did [but] I don't think they should be judged too severely."

However, Putin's words have not yet translated into action. Seven years incarceration is still a very real possibility. Our sources inside Russia tell us that the trial may wrap up as early as next Wednesday, August 15, and some signs are pointing in the direction of sending the women off to a labor camp.

Say what you will about Pussy Riot: this may not be your kind of music. Some people find their shows offensive.

But it doesn't change the facts: Since March, these young women have been in jail and kept from their families, including small children, and they are being threatened with seven years imprisonment - all because of a peaceful protest song that lasted less than a minute.

Tell the Russian authorities to drop all charges and release Pussy Riot immediately.

Amnesty International considers these women to be prisoners of conscience, and we are not going to give up on them. Sadly, members of Pussy Riot aren't the only ones getting caught up in the backlash against dissidents in Russia lately. One of Putin's fiercest critics, blogger Alexei Navalny, was charged this week with embezzlement, a crime that could carry up to a 10-year prison sentence.

The crackdown doesn't stop there. In recent weeks, President Putin and his cronies have moved swiftly to limit street protests by enforcing hefty fines and re-criminalizing some forms of defamation.

Oppression thrives in silence. That is why we must loudly demand that Russian authorities free Pussy Riot now!

It is not hard to spot Pussy Riot supporters - bright tights, colorful dresses and faces covered by balaclavas. At our protests outside the Russian Embassy in Washington, DC, we're using multi-colored ski masks - check out our pictures!

Some high-profile musicians are also taking action in solidarity. During recent concerts in Russia, rockers Sting, Red Hot Chili Peppers and Franz Ferdinand all called on the Russian authorities to free Pussy Riot and respect freedom of expression. Madonna, Peter Gabriel and Pete Townshend of The Who have voiced their support too.

Now that even President Putin has flinched at the punishment Pussy Riot is facing, it won't be long now before the court in Moscow faces the music that world leaders, celebrities and activists alike are already chanting with passion and pride:

Thank you for all you do to stand for justice,

One can reasonably wonder, since we now know that our DNA is 98% microbial, not "human", what polluting the environment will cause in terms of genetic mutations in our species.

The isses around pollution are deadly serious.

And may I add a clarification to the tail end of my # 4 comment. I am not against bringing China into the 21st century...but,


we must show real leadership and standards I believe are being diluted and have fallen by the way side in loo of profit.