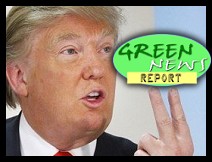 IN TODAY'S RADIO REPORT: A nuclear re-start for Japan --- but also a solar revolution; Most anti-environment Congress in history, gutting everything --- or at least trying to; Rio+20: UN Sustainability summit gets underway in Brazil; PLUS: Oh really, Donald Trump? OPEC is in the tank for Obama?!? .... All that and more in today's Green News Report!