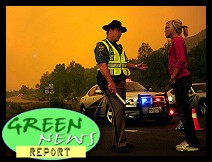 IN TODAY'S RADIO REPORT: Raging wildfires turn deadly in the West; More frequent wildfires predicted in coming years... while Mitt Romney campaigns against hiring more firefighters; VA GOP banishes the words 'sea level rise''; PLUS: 2012: Hottest spring on record for the US .... All that CRAZY and more in today's Green News Report!