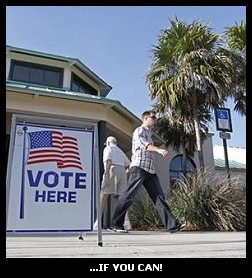 The state of Florida and it's Secretary of State Ken Detzner (R) are knowingly violating Section 5 of the Voting Rights Act in their attempted purge of "potential non-citizens" from the Sunshine State voting rolls, according to a new federal lawsuit [PDF] filed by the ACLU and the Lawyers' Committee for Civil Rights Under Law.

The complaint follows on the heels of a May 31, 2012 two-page letter submitted to FL election officials by T. Christian Herren, the chief lawyer of the U.S. Justice Department's Voting Rights Division. In his letter, Herren opined that the state's voter roll purge is in violation of Section 5 --- at least in the 6 Florida counties "covered" by that section --- because the state has not sought preclearance from either the DOJ or a federal court, as required by that section of the 40-year old federal law.

Additionally, the DOJ notes in its letter, the purge, coming as it does within the 90 days before Florida's federal primary election, is also in violation of the National Voter Registration Act (NVRA) which covers the entire state.

In response, FL State Department spokesman Chris Cates initially said they would continue the purge nonetheless, as they were "firmly committed to doing the right thing and preventing ineligible voters from being able to cast a ballot." In his official response to the DOJ a few days later, Detzner all but challenged the feds to bring a suit in order to stop the state from continuing their efforts.

Of the original 180,000 names identified by the state as potential non-citizens, out of some 11.3 million registered voters in the state of Florida, 2,700 were sent to county election officials with instructions to notify those voters that they had just 30 days to prove their citizenship or be removed from the rolls. As reported by the Christian Science Monitor, "Before heeding DOJ’s order to stop the purge" county election officials had identified just four noncitizens who "may have voted in past elections, making them potentially guilty of voter fraud," while clearing hundreds of voters who had, in fact, been legally registered voters. Hundreds of others may have been removed from the rolls, despite being legally registered citizen voters.

As The BRAD BLOG previously reported, Herren had demanded that FL officials "advise whether the State intends to cease the practice," but stopped short of issuing an actual "order" that FL immediately cease and desist. Such an order would have to come by way of an injunction issued by a U.S. District Court. The ACLU lawsuit now seeks that injunction even though, according to the Miami Herald, county elections supervisors across the state, led by Leon County's Ion Sancho, are now refusing to carry out a purge which Sancho describes as "illegal."

The ACLU lawsuit alleges facts that suggest the FL GOP is relying upon a FL Department of Highway Safety and Motor Vehicles (DMV) database that it knows cannot provide an accurate basis for establishing non-citizenship until 2017.

Unfortunately, this year's purge in Florida continues a tradition that has been affecting legal voters in Florida --- and, along with them, the rest of the nation --- cycle after cycle since at least the 2000 election...

We are not aware of any documented cases in which individual noncitizens have either intentionally registered to vote or voted while knowing that they were ineligible. Given that the penalty (not only criminal prosecution, but deportation) is so severe, and the payoff (one incremental vote) is so minimal for any individual voter, it makes sense that extremely few noncitizens would attempt to vote, knowing that doing so is illegal.

Although there are a few recorded examples in which noncitizens have apparently registered or voted, investigators have concluded that they were likely not aware that doing so was improper.

Levitt, who would go on to present compelling testimony debunking GOP "voter fraud" claims generally during September 2011 hearings before a U.S. Senate Judiciary Subcommittee pertaining to the recent spate of ALEC/GOP voter suppression laws, added in the Brennan Center report that what is far more common are bogus claims of non-citizen voting based upon inadequate databases.

"Naturalization documentation," the Brennan Center report noted, "may find its way into the government files slowly, or not at all, leaving outdated or inaccurate information for investigators looking for fraud. And this, in turn, leads to flawed accusations that non-citizens have been voting, when the voters in question have in fact become fully naturalized American citizens."

This is precisely what the ACLU complaint documents as now occurring in FL.

Murat Limage, a named plaintiff in the ACLU lawsuit and resident of Hillsborough, a county covered by Section 5 of the VRA, last updated his driver's license on 11/6/08. He became a naturalized U.S. Citizen on 10/19/10. Yet, on 03/13/12 the Hillsborough County Supervisor of Elections sent a letter advising him his name may be removed from the voter rolls unless he proved his citizenship within thirty (30) days.

While Limage produced his passport, proving his citizenship, the ACLU lawsuit seeks an injunction on his behalf as well as others because he has not received formal notification that he will be permitted to vote.

As reported by the Sun-Sentinel, while the "potential non-citizen" excuse is new, this is by no means the first occasion in which the FL GOP has relied upon a faulty database as an excuse to purge thousands of eligible voters, though in the previous two occasions --- 2000 and 2004 --- the purported target was "convicted felons," who are ineligible to vote in the Sunshine State.

, investigative reporter Greg Palast touched upon the first purge which was carried out by then FL Secretary of State Katherine Harris (R), then a co-chair of the Bush/Cheney campaign.

ChoicePoint’s DBT unit came up with a list of 94,000 “felons” to purge the Florida voter rolls before the 2000 election. At least 91,000 were innocent legal voters but the vast majority of these were guilty of nothing more than being Black, Democrat or both.

This, of course, occurred in an election in which, per the official, Katherine Harris certified count after the U.S. Supreme Court blocked the state from actually counting the voters' ballots, George W. Bush "won" FL and the Presidency by just 547 votes.

The FL GOP would come up with another 48,000 "felon voters" in 2004, but, the Sun-Sentinel adds, the state "pulled back" because of all the false positives.

In 2005, the GOP-controlled state legislature passed a "no match, no vote" law which gave election officials the power to preclude voting for the slightest divergence, such as a clerk's clerical error or the inclusion of a middle initial instead of a full middle name, between a voter's ID card and the voter database.

Last month U.S. District Court Judge Robert L. Hinkle enjoined a 2011 law which imposed impediments to voter registration that were so onerous that the League of Women Voters of FL was forced to call a halt to their registration drives in the Sunshine State for the first time in 70 years. As revealed by Levitt’s Senate testimony last year, the FL GOP rammed through its 2011 limitations on voter registration despite the fact that nearly identical registration restrictions in a 2005 statute enacted by the GOP-controlled state legislature had been struck down as unconstitutional in League of Women Voters of Florida v. Cobb.

The dirty tricks will intensify. Let's hope we will be able to keep up.

Here's the Miami Herald story on Scott's response to the DOJ demand:

"Gov. Rick Scott’s election’s chief on Wednesday defiantly refused a federal demand to stop purging non-citizens from Florida’s voter rolls, intensifying an election-year confrontation with President Barack Obama’s administration as each side accuses the other of breaking federal law.

In a sharply worded letter, Scott’s administration claimed the Department of Justice doesn’t understand two federal voting laws at the heart of the dispute and was protecting potentially illegal voters more than legal ones."

Here is a link to a letter presumably sent from the DOJ to the FL Sec State in response to the state's "defiance" noted in my previous post, above.

Ernest, please explain. May we assume this is NOT an injunction but a threat to go to court to seek one?

"
Florida Gov. Rick Scott (R) announced Monday that the state would sue the Department of Homeland Security to gain access to a database containing information on eligible voters.

“The Florida’s Secretary of State office will be filing a lawsuit against the Department of Homeland Security to give us that database,” he said on Fox News. “We want to have fair, honest elections in our state and so we have been put in a position that we have to sue the federal government to get this information.”

(Yes, it's a Raw Story article but I won't be tracking down the alleged, original, FOX Terror Network source.)

Thanks for the link to the o6/11 letter from Assistant Attorney General Thomas Perez to the FL Sec. of State.

Mr. Perez ends the letter with "I have authorized the initiation an enforcement action against Florida in federal court."

This means that since FL is refusing to comply, the DOJ intends to seek a formal court order enforcing the provisions of both Section 5 of the Voting Rights Act and the National Voter Registration Act.

He notes that the SAVE program works only when unique identifiers, such as alien registration numbers found on immigration related documents are provided and that FL admitted eight months ago does not collect those identifiers.

Homeland Security has been willing to work with FL but FL has failed to either provide the necessary info to DHS.