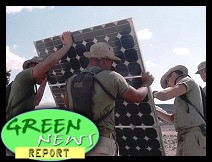 IN TODAY'S RADIO REPORT: House GOP attacks America's clean energy industry --- again; Solar becoming cheaper than coal --- finally; Coal industry panicking --- naturally; Americans willing to pay more for clean energy, as long as it's not nuclear; PLUS: Australians are hot --- the hottest they've been in a thousand years ... All that and more in today's Green News Report!

At present uses of Solar in Bangladesh very little, But i feel its very impotent for our country, Here in Bangladesh Our government cant coverage electricity that is why Need to use solar. I know its cost a little much but only for one time. I already used in in my office.

If i want to cover 10 PC in My office, than what should be the solar capacity ???

Thank you Brad and Desi!!!