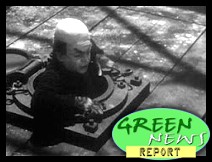 Congrats on the Young Turks episode.

I wanted to point out that some new and disturbing statements have been made in the past few days by Chomsky, Hansen, and other scientists that are "apocalyptic."