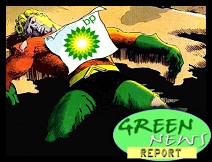 IN TODAY'S RADIO REPORT: BP Oil Disaster in the Gulf, 2 years on: Bizarre mutations in the Gulf ecosystem; First criminal charges finally filed; BP's billion-dollar settlement on hold; PLUS: Never mind Earth Day --- Mitt Romney wants to double down on coal.... All that and more in today's Green News Report!

"How to Buy Time in the Fight against Climate Change: Mobilize to Stop Soot and Methane"

Des, it looks like the methane battles (keep methane in the permafrost and out of the atmosphere) have been lost. Now we are in the rapid acceleration phase.

Thanx for the report... and the snarky comments.

Does anyone really deny that the climate changes? That would be silly. But the hysteria over the cause of it makes me crazy. I appreciate your balanced approach to the topic, because the deniers have become so withdrawn from any association with the global warming religion that they sometimes fail to acknowledge that there are still things we could do to take care of the environment without buying into the insanity.

Thanks for the perspective. Great blog.

Lindsay, you are correct that no one disputes that the climate has changed before due to natural forcings.

For those who are genuinely interested in understanding climate science, climate change and the uncertainties therein, please go to SkepticalScience.com, the comprehensive database of ALL the denier arguments, with easy-to-understand explanations and links to the primary scientific literature that you can read for yourself.

Hint: those who call global warming a 'religion' are deniers who reject science.