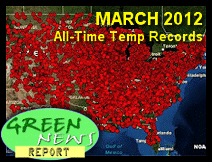 IN TODAY'S RADIO REPORT: It's official: March 2012 the warmest March on record in the US; So much for April showers - wildfires and drought break out along the Eastern seaboard; PLUS: Whole Lotta Shakin' Going On: Fracking boom leads to natural gas glut and fracking earthquakes... All that and more in today's Green News Report!

If natural gas prices are so depressed, I wonder why my cost per CCF has not changed. Seems supply and demand means nothing to the fossil fuel conglomerates.

Thanks for the great links.

I'm not certain about man-made climate change, but will concede that for this purpose. If we are serious a few things will have large impact, without impacting everyone via taxation.
1. Curtail the US military
The Department of Defense was the largest single consumer of energy in the United States in 2006.[35]

In FY 2006, the DoD used almost 30,000 gigawatt hours (GWH) of electricity, at a cost of almost $2.2 billion. The DoD's electricity use would supply enough electricity to power more than 2.6 million average American homes. In electricity consumption, if it were a country, the DoD would rank 58th in the world, using slightly less than Denmark and slightly more than Syria (CIA World Factbook, 2006).[36]

The cost of A/C in Vegas, the maintaining of ice rinks year round and the lack of "true" mass transit would, coupled with a military cutback on wars would significantly lower our carbon footprint. If this was coupled with replacement of
non-efficient windows and doors in a streamlined program (ie not run through the gas/electric companies)that would include solar water heating and electric use we'd really lower consumption.
Cordial regards
Mike

Michael @#2, as you've noted, regardless of whether you believe the scientific community on the evidence that indiscriminate dumping of waste into the atmosphere has consequences, there is plenty of room for common ground on cleaning up our energy and wasting less of it.

Luckily, major research has already established the astounding economic benefits of utilizing the low-hanging fruit of energy efficiency, in all sectors of the economy:

The near-term economic benefits from focusing on energy efficiency and clean energy deployment using currently-available technology would go a long way to strengthening our economy with home-grown industries and home-grown energy. It should be a no-brainer to launch the next great American energy revolution, but unfortunately that's not the political world we live in right now.