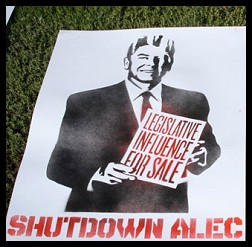 Wisconsin's Open Meeting Law recognizes that our form of "representative government" is "dependent upon an informed electorate," who are "entitled to the fullest and most complete information regarding the affairs of government as is compatible with the conduct of government business." To that end, the law requires that "all meetings of all state and local government bodies shall be publicly held in places reasonably accessible to...the public and shall be open to all citizens." (Wis. Stat. §§19.81(1) & (2))

ALEC, the ethics complaint alleges, is a non-profit, 501(c)(3) corporation made up of "private sector" and "public sector" members. "Its private sector members include many of the world's largest corporations, such as Koch Industries, Wal Mart, Time Warner, Pfizer & AT&T...who are primarily represented at ALEC meetings through their lobbyists", while "ALEC's public sector members are state legislators."

The thrust of the complaint is that ALEC does much more than simple "lobbying" --- the act of trying "to influence the thinking of legislators or other public officials for or against a specific cause." Its public and private sector members essentially act as a secret, unelected legislative body (legislative task force) where "corporations and legislators deliberate [and draft] 'model bills.'"

Per ALEC's bylaws, "State Chairs" (legislators) have an obligation to ensure that the "model bills" are introduced. The State Chairs and "Private Enterprise Chairs" (usually lobbyists) have some leverage for the accomplishment of that task in that they control the "scholarship" fund --- a fund donated by corporate members of ALEC and used to reimburse legislators for travel, meals and lodging expenses incurred in attending ALEC task force meetings.

Sen. Scott L. Fitzgerald (R) served as an ALEC State Chair in 2010, according to the ethics complaint. His elevation to Majority Leader in the WI State Senate placed him in a powerful position to insure that the ALEC agenda was introduced during the 2011 legislative session. That agenda, also mirrored by other ALEC members in other states, included bills to strip citizens of collective bargaining rights and new, draconian restrictions on the voting rights of previously legal voters.

CMD must do more than raise a "legitimate question," however. To establish that the ALEC Task Force System violates Wisconsin's Open Meeting Law, CMD must establish that the task force sessions amount to a "meeting" of a Wisconsin "governmental body."

The theory under which CMD could proceed is actually to be found in a 2007 Open Meeting Law Compliance Guide [PDF] issued by WI's Republican Attorney General J.B. Van Hollen. Citing State ex rel. Lynch v. Conta (1976), the guide discusses the concept of a "walking quorum," in which "members of a governmental body" meet "to engage in governmental business" in a "series of gatherings among separate groups of members of a governmental body, each less than a quorum, who agree, tacitly or explicitly, to act uniformly in sufficient number to reach a quorum."

In the Conta case cited by Van Hollen, the WI Supreme Court stated that a private conference must "be analyzed to see if it is designed to avoid an open meeting requirement." The Court, as the state AG notes, "recognized the danger that a walking quorum may produce a predetermined outcome and thus render the publicly-held meeting a mere formality."

Consider the concern that a "walking quorum" can produce a fait accompli in the context of the report (and accompanying video) by Slate's David Weigel on last year's "Budget Repair Bill", which included the state's controversial prohibition on collective bargaining for certain public unions, and how it was suddenly and surprisingly rammed through the Wisconsin Assembly.

As Weigel observed at the time:

The debate in the Assembly appeared to be a few hours away from ending when Speaker Pro Tem Bill Kramer interrupted their speeches and called the vote. It was gaveled in with lightning speed, less than the standard 15 seconds --- it was so fast that 28 members did not even vote on it, some out of protest but some failing to reach their buzzers. There were 51 ayes and 17 nays, and the nays included Republicans Dean Kaufert, Lee Nerison, Richard Spanbauer, and Travis Tranel.

Democrats exploded as soon as the vote was called, yelling "Cowards!" and "Shame!" at the Republicans filing out of the room.

The video of that extraordinary moment follows below...

Keep in mind the gravity of the legislation for which debate was so abruptly terminated --- an act which U.S. District Court Judge William M. Conley in Wisconsin Education Assoc. Council v. Walker [PDF] described as representing "a sweeping right turn from a half century of developments in the rights of its public employees to unionize, collectively bargain and collect union dues."

Neither the gravity of this momentous change nor questions of constitutionality --- Judge Conley, in his decision issued last Friday found portions of the extraordinarily controversial Act to be unconstitutional --- were of any moment to the "walking quorum" whose apparent fealty to ALEC's private and secret legislative process seems to have rendered the "public hearing a mere formality."

The CMD ethics complaint charges that the ALEC "scholarship" fund violates WI Stat. §13.625 which prohibits lobbyists from furnishing lodging, transportation and meals to legislative employees. While Section 19.56(3)(a) does permit public officials to receive such reimbursement from organizers of "gatherings to discuss...legislative...processes and proposals," here ALEC appears to engage in a "shell game." The funds, the ethics complaint contends, come directly from corporations who are principals within the meaning of WI lobbying laws. The funds, which ALEC ostensibly holds in trust, are then delegated to the State Chairs for distribution.

As the complaint alleges:

It makes little sense to prohibit corporate principals and lobbyists from offering anything of value to public officials, but to allow such giving if it is filtered through a segregated ALEC 'scholarship fund.'

"In the past," the complaint continues, "the ethics board advised Wisconsin legislators to make the scholarship fund 'blind' so that legislators do not know which corporate interests are paying their expense." But the identity of the corporate donors, almost all of whom are principals who employ lobbyists in WI, are readily accessible. Those lobbyists attend ALEC meetings themselves. One donor, Pharmaceutical Research & Manufacturers of America (PhRMA), for example, "listed a $356,075 contribution to the 'ALEC Scholarship Fund' on its Form 990."

As set forth above, the complaint also alleges that a good number of the Republican legislators failed to report their "scholarships" on their 2011 Statement of Economic Interests, which, if intentional, could carry a fine and up to one year in jail.

CMD's complaint alleges several outright gifts in direct violation of WI law. For example, it discusses an April 7, 2011 invitation from Time Warner Cable to a "night at the ball park." The event was to take place on April 29. It just happened to coincide with an ALEC Task Force Summit in Cincinnati, Ohio. The invitation, which was extended to registered guests and their spouses, said "ALEC will have access to the ballpark party decks where select food and drinks will be provided."

The email invitation was sent to Rep. Robin Vos (R), whose staff forwarded it to "44 individuals, primarily Wisconsin state legislators and staffers."

On 4/28/11, the complaint continues, SB 13, "a telecommunications bill that would benefit Time Warner Cable," was introduced. "That same day, thirteen of the twenty Assembly members who received the invite to the Time Warner Cable 'night at the ballpark' added themselves as co-sponsors to the bill." SB 13 was passed by the Assembly on 5/11/11.

Thanks for reporting this Ernest. There seems to be an avenue by which at least one state can fight ALEC. Do you think it possible that other, similar violations can be filed in/by other states?

Do you think it possible that other, similar violations can be filed in/by other states?

Obviously, the ethics laws and the Open Meetings laws will differ from state-to-state, but the threat to representative democracy posed by this form of privatized legislative systems exists throughout the U.S., but especially in states where the GOP has a majority in state legislative bodies.

Superb investigative reporting about Wisconsin shenanigans by both Brendan Fischer and EC!

I did a post about ALEC which includes links to interviews that NPR's Terry Gross conducted with ALEC expert John Nichols from "The Nation", and the national chairman of ALEC, Noble Ellington.

I'm sure Ellington is sorry he made the mistake to go on "Fresh Air" and be interviewed by one of the best talk show hosts in the country.

They are such SHAMELESS PIGS