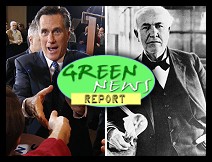 IN 'GREEN NEWS EXTRA' (see links below): Global sea levels could rise as much as 70 ft; Louisiana to elevate Gulf Coast highways; Solar micro-spheres collect 360 sunshine; Antibiotic-resistant superbugs could mean 'end of modern medicine'; ‘Pink slime’ is the tip of the iceberg; Chinese foodies have a solution for Asian carp invasion; CA farm country's water is dangerously polluted; Spring sprung too soon means death blow to butterfly; Speed record on the power grid ... PLUS: O.E.C.D. warns of ever-higher greenhouse gas emissions ... and much, MUCH more! ...

We have to get rid of our etch a sketch energy policy.