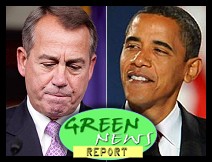 IN 'GREEN NEWS EXTRA' (see links below): TX to unlock secrets of fracking; 'No evidence' that Wind Turbine Syndrome exists; Bush speechwriter slams 'culture war' over climate change; Should we only have rules coal lobbyists agree to?; Bat deaths a catastrophe in the making; New mileage standards save money immediately; Coral reef disease hits Hawaii; Breakthrough material 'eats' CO2 in the air ... PLUS: 5 myths about the Keystone XL pipeline ... and much, MUCH more! ...


From coal mines to rice paddies and cooking fires to diesel exhausts, 14 highly cost-effective measures could quickly curb global warming and save millions of lives, while also boosting global food production. That is the striking conclusion of a new study published in Science and the most authoritative look yet at the opportunities offered in tackling methane and black carbon - soot - pollution.

The headline findings are striking.