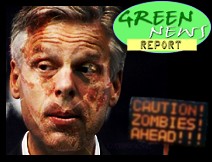 
The deal also set up the bodies that will collect, govern and distribute tens of billions of dollars a year for poor countries. Other documents in the package lay out rules for monitoring and verifying emissions reductions, protecting forests, transferring clean technologies to developing countries and scores of technical issues.

Amphibians have co-existed with microbes for millions upon millions of years.

All of a sudden a microbe fungi has gone rogue and is destroying amphibians worldwide.

The human-microbe symbiosis could be affected by whatever it is that is making some microbes lose it.

People would start thinking weird about the environment and all things green ... like a symbiont destroying its host ... which is not only not normal, it isn't even on the same planet as normal.

Hey Dredd, I've been talking about the amphibian devastation for years. Ever since my daughter used to spend summers in Minahoota with her father, and there was on teevee a report about a elementary school teacher who took her class out for a field trip. The kids caught and brought back frogs with five and six legs. Combine that with the funny taste of the water I found while I was there, which I bought the family a water purifying system that they took as an insult. Anyway, I without doing any scientific testing, but using occam's razor figured it was from fertilizers used by the farming industry. I'd still bet money I'm right. But, while studying biology and also natural healing I was taught by a healer that teatree externally and silver suspenion solutions kills viruses internally. Now I know about the guy who took way too much silver and turned blue, but just like your not to take a prescription but as directed that guy damaged the reputation of silver as an effective med. But, what is really interesting in connection to your article is the fact that what I was told is that viruses feed off of microbes that we all get exposed to. So maybe if by killing the viruses off with teatree or silver the prions and phages wouldn't have a chance to mutate. Just a hypothesis...

It could be also in conjunction with the exposure to pesticides. Fertilizer and pesticides together would definately have a biological effect.

I am really very pissed about their ability to patent life. That is an anathema to us all.

My research shows that the fungus that is decimating the amphibians is in full production mode because pesticides have taken out some of its natural moderators.

Hey Dredd, its both. In combination , which they make you buy once on their shitty product, farmers wind up doing both! But the smaller effector is one or the other...in combination... TOTALLY DEADLY >>>EVENTUALLY...which in combination of the med industry is making bazillions!!!!!!!!!!!!!!!!!!!!

Just got back from visiting sister and family in eastern PA, and hey...despite the conservative delusion of this state's image most people I meet are here for real good reason. It's a matter of time my friend!