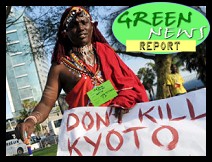 IN 'GREEN NEWS EXTRA' (see links below): Radiation covers 8% of Japan; Fukushima crisis 'stunting children's growth'; Majority in U.S. Support Carbon Tax ... PLUS: The New Story of Stuff: Are we reaching "peak stuff"? ... and much, MUCH more! ...


As if to illustrate the effects of global warming, a fierce storm on the eve of the talks flooded shack settlements and killed at least five people in the port city hosting the international gathering.

The White House Office of Information and Regulatory Affairs (OIRA) is trashing the promises made during the last presidential election.