Federalist Society perversion of the judiciary

While many now flocking to Occupy Wall Street focus on the pernicious impact of a gaping wealth disparity and the near total domination of our executive and legislative branches of government by corporate wealth, too few have come to appreciate how court-packing by the ultra-radical, right-wing Federalist Society has undermined the rule of law.

In an August 2001 report, "The Federalist Society: From Obscurity to Power," the People for the American Way documented how the Federalist Society, founded by Robert Bork and funded by right-wing billionaires --- "the John M. Olin, Lynde and Harry Bradley, Sarah Scaife, and Charles G. Koch foundations" --- became a clearinghouse for judicial appointments under GOP regimes. (The GOP tactic under the Clinton and Obama administrations has been to turn the confirmation process into a bottle neck so as to assure vacancies during GOP administrations.)

Four of the nine Justices now sitting on the U.S. Supreme Court --- Associate Justices Scalia, Thomas & Samuel Alito along with the Chief Justice John Roberts --- are affiliated with the Federalist Society, though the Bush administration took pains to conceal the Chief Justice's affiliation during his confirmation hearings.

It is an affiliation that prompted Jim Hightower to describe the four as "a Corporatist Supreme Court Cabal," in which both Scalia and Thomas have regularly attended the Koch brothers' plutocratic political functions and in which these radicals-in-robes have done the hard-right's bidding through such democracy-destroying decisions as Citizens United --- the case which will live in infamy and the judicial coup that was Bush v. Gore.

Above the rule of law 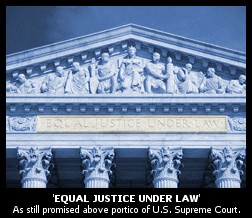 In its coverage of Scalia and Thomas being feted at a dinner sponsored by pharmaceutical giant Pfizer Inc. and a law firm which will argue against the constitutionality of President Obama's healthcare law, Los Angeles Times brushes aside the appalling lack of propriety by noting that these two miscreants "have been attending Federalist Society events for years," and, besides, Supreme Court Justices "are exempt from the code of Conduct that governs the actions of lower court judges."

While that standard makes a mockery of the words which appear above the portico to the U.S. Supreme Court --- "Equal Justice Under Law" --- it squares with Law Professor Paul Campos' observation that it "is very unlikely [that Thomas would] be prosecuted or otherwise sanctioned for the simple reason that, in the United States in 2011, we have a two-tiered system of laws" where, for the vast majority of citizens, "an unusually harsh criminal code" has given rise to "by far the biggest prison population in the world." Nonetheless, he added, "our political and financial elites operate with something approaching complete impunity."

A salient but much overlooked fact is that the Federalist Society was founded in 1982 by Judge Robert Bork.

For many Americans Bork first became a household name during an event known as "the Saturday night massacre."

At the height of the Watergate scandal, a Democratic-controlled Senate Judiciary Committee insisted that Nixon’s choice for Attorney General, Elliot Richardson, agree to name a special prosecutor to investigate issues pertaining to Watergate. Richardson appointed Archibald Cox, a former U.S. Solicitor General. Cox’s aim was true. He went after the tapes of Oval Office conversations --- the very tapes that ultimately led to the "smoking gun" revelations that supported Articles of Impeachment and culminated in Nixon’s resignation.

When Nixon tried to stonewall, Cox obtained a federal court order for their release. Nixon ordered Cox to stop pursuing the tapes. Cox not only refused but told Nixon he would seek a court order holding him in contempt. In succession, Attorney General Richardson and Deputy Attorney General William Ruckelshaus chose honor over personal loyalty, resigning rather than carrying out the order to fire Cox. Nixon then turned to Solicitor General Robert Bork, who apparently had no ethical qualms about sacking Cox.

Bork's and the Federalist Society's reactionary goals were best summarized by Senator Edward ("Ted") Kennedy's remarks during the floor debate over Bork's unsuccessful 1987 nomination to the U.S. Supreme Court by President Ronald Reagan:

This debate has been a timely lesson in this bicentennial year of the Constitution of our commitment to the rule of law, to the principle of equal justice for all Americans and to the fundamental role of the Supreme Court in protecting the basic rights of every citizen. In choosing Robert Bork, President Reagan has selected a nominee who is unique in fulminating opposition to fundamental constitutional principles as they are broadly understood in our society. He has expressed opposition time and again, in a long line of attacks on landmark Supreme Court decisions protecting civil rights, the rights of women, the right to privacy and other individual rights and liberties. Judge Bork may be President Reagan’s ideal ideological choice…but that choice is not acceptable to Congress and the country, and it is not acceptable in a Justice of the nation’s highest court.

Unfortunately, Bork's views are not unique. They are the views held by the Federalist Society-funding billionaire oligarchs, like the Koch brothers, who would mask their authoritarian corporate capitalism under an Orwellian concept of "liberty" as the two-tiered system of "justice" entailing elite impunity is assured by a "bought-and-paid-for" judiciary.

In Justice Thomas' case, we know with certainty that he violated the law with his annual filings going back for years, which were without question false. His defense in the unlikely event of a prosecution would be that he misunderstood the requirements, and thus had no intent and could not be found guilty.

I'm not sure any of the others have a pattern of violating law, but there is no doubt that they lack intellectual honesty, which one would think is a fundamental requirement to serve on any court, much less our highest.

I would love to be able to put Scalia on the spot and question his "strict constructionist" legal philosophy on some questions which would be difficult for him to answer. In particular, since he has publicly stated that the meaning of the 14th amendment depends on what certain words were assumed to mean when they were written, someone needs to ask him what "arms" meant in the second amendment when it was written. Does he think that arms meant breech loading automatic weapons, which had not yet even been invented? Presumably arms did mean swords and muzzle loading weapons, so I should be able to wear a sword without restriction, yet bans on swords or large knives or crossbows don't seem to be a constitutional issue.

http://neocon-panic-atta...phen-breyer-assumes.html Justice Breyer states that we should be questioning the Supreme Court. The people are the final say, not the court. Rule of law missing at such a high level is an indication of default.

The radicals in robes link goes to a book written by Cass Sunstein who has said:

(The Empire Strikes Back, quoting Sunstein). That fascist ideology by Sunstein doesn't take away from your premise, but there are some studies that show the federal judiciary is more right wing than at any time since the Depression.

Those would be better sources for bloggers to read than Sunstein.

And Sunstein is considered one of the LIBERAL members of the University of Chicago's Law School faculty!

Couldn't have said it better myself Ernie, many thanks. FIND OUT THE TRUTH, THEN VOTE!

The lack of documented information in this country is GROSS. Thanks Brad et al for being real.

Actually, Professor Sunstein moved from the University of Chicago Law School to my alma mater, Harvard Law School. He is currently Administrator of the Office of Information and Regulatory Affairs in the Office of Management and Budget.