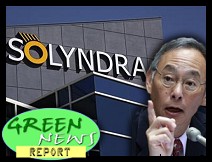 IN TODAY'S RADIO REPORT: Political kabuki theatre in the U.S. House over the Solyndra bankruptcy; Obama says "climate change", but only in Australia; It's official: the weather is getting weirder; PLUS: Harvesting water from the desert air... All that and more in today's Green News Report!

IN 'GREEN NEWS EXTRA' (see links below): Does government regulation really kill jobs? NO.; New federal fuel economy rules: 54mpg by 2025: CEO: "No question" new EPA rules create jobs; Defense Science Board warns of "failure to anticipate and mitigate" climate change... PLUS: VIDEO: Watch global CO2 go up and up and up ... and much, MUCH more! ...

I usually don't comment on GNR. As a tree hugger, I have to thank you Brad and Desi for these links to essential and informative articles.

PS All your links to articles are of interest to me, These just triggered a comment

The Green News Report is a breath of fresh air, really!

We could "discover" 67% of our electrical energy needs by fixing our national power grid.

Without paying for the dirty oil, dirty gas, and dirty coal that generates it.

Thanks for the additional links, Dredd and Rick!