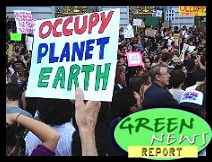 IN TODAY'S RADIO REPORT: Occupy Wall Street's bicycle-powered generator trashed by police in raid?; A huge victory for Keystone XL pipeline opponents --- but will it last?; Fracking chemicals found in Wyoming drinking water; PLUS: A prominent climate change skeptic calls for climate change action in Congress ... All that and more in today's Green News Report!

IN 'GREEN NEWS EXTRA' (see links below): Clean energy: highest rate of return of any federal program; Why solar is better than stocks; American Electric Power CEO: 'No doubt' EPA regulations create new jobs; The false gospel of green marketing ... PLUS: Reinventing Fire: How the U.S. can change energy use forever ... and much, MUCH more! ...

It is the Subcommittee's judgment that if action is not taken to reduce the environmental impact accompanying the very considerable expansion of shale gas production expected across the country - perhaps as many as 100,000 wells over the next several decades - there is a real risk of serious environmental consequences and a loss of public confidence that could delay or stop this activity.

And this comes from an advisory panel that, when it was set up, was heavily criticized from having too many participants with cozy fossil fuel industry ties.

There are reports of widespread radiation showing up in Europe: Link, Link.

We could increase national energy production by two-thirds, and create jobs at the same time, with an overhaul to the national power grid.

Not to mention an increase of national security as a bonus.