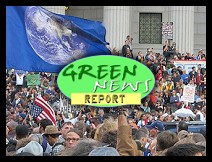 
A State Department official has admitted to the New York Times that the EIS was conducted by a company chosen and paid by TransCanada itself, flouting NEPA’s conflict-of-interest rules.

A State Department official provided Fourth of July party invitations, subtle coaching and cheerleading, and inside information about Secretary Hillary Rodham Clinton's meetings to a Washington lobbyist for a Canadian company seeking permission from the department to build a pipeline that would carry crude from the oil sands of Canada to the Gulf of Mexico.

The American Journal of Public Health links an increase of unexpected types health problems of strange sorts to the continued use of petroleum as peak oil reality passes on by.

Texas edits out references to climate change in official documents.