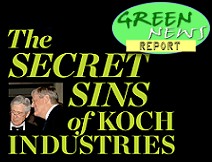 IN TODAY'S RADIO REPORT: Koch Industries did business with Iran, despite trading ban, alleged to have bribed several other countries; Shell Oil bribed Nigerian officials; Republicans' investigation of Solyndra halts military solar program; PLUS: The future is here: Winning clean energy home designs at the Solar Decathlon ... All that and more in today's Green News Report!


Confidential memos, faxes, witness statements and other documents, released in 2009, show the company regularly paid the military to stop the peaceful protest movement against the pollution, even helping to plan raids on villages suspected of opposing the company. According to Ogoni activists, several thousand people were killed in the 1990s and many more fled that wave of terror that took place in the 1990s.

It is more broad than just Texas, and some climatologists are thinking decades.