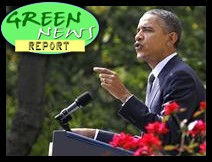 IN TODAY'S RADIO REPORT: The President fights back; the EPA doesn't --- for now, anyway; Shell Oil one step closer to drilling in the Arctic; Massive anti-nuke protests in Japan; PLUS: Australia's prime minister faces the global warming fight head on ... All that and more in today's Green News Report!


This is not class warfare. It's math.

Fukushima was affected to some degree by two typhoons this month, the more recent one today and yesterday.

Meanwhile there are higher radioactivity readings in Tokyo which are reinvigorating some talk of evacuations of parts of Tokyo.

Fixed your link for you, Green Police. In future, please post workable links (include the http://). We also require that you include a description or descriptive title for all YouTube videos so our readers can decide if they want to view them.

As I said in the other thread in which you posted this same link, if allegations that the Solyndra executives may have mislead the Obama Administration are proven in a court of law --- as all accurate and objective timelines of events seem to indicate so far --- then they should be prosecuted. Very simple.

But if all of the investigations turn up no evidence of wrongdoing, Green Police, you'll be just as anxious to come back and report that, right?