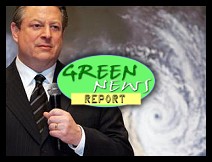 IN TODAY'S RADIO REPORT: Republicans pounce on bankruptcy of US solar company Solyndra --- but what are they not pouncing on?; Shocking revelation: BP is to blame for BP's oil spill; PLUS: Al Gore's "24 Hours of Climate Reality" --- Well, that'll be a nice change of pace! ... All that and more in today's Green News Report!


"This isn't picking winners and losers. It's helping ensure that we have winners here at all," he said. "We invented this technology, and we should produce it here. The question is whether we are willing to take on this challenge, or whether we will simply cede leadership in this vital sector to other nations, and watch as tens of thousands of jobs are created overseas. The administration believes this is a battle we must fight and win."

Where was the fiscally concerned members of the GOP when the Bush Administration was squandering billions in no-bid contracts in Iraq?

The original source for climate change denial (agnotology) is identified in this video of a university professor's lecture presentation to students.

If you consider a climate change alarmist Al Gore 24 hr rant a reality, you just excused yourself from making any comments about the topic, please stick to the talking points.
As for the Chinese gov't to give massive amounts to their solar companies should justify the fraudulent loans to their American counterparts, is rubbish, not only because Chinese don't have any environmental laws to content with as we do here, they are still are a Communist country. . . and the last time I checked a free competition (which btw we haven't had here in decades), always beats gov't cronyism that the Communism system is.

Perhaps English is not your first language? If so, perhaps you've had difficult understanding our coverage of these stories.

Nobody --- not us, nor anybody else to my knowledge --- has suggested that the massive amount of subsidies China gives to hits solar companies "should justify the fraudulent loans". What we did report, was that China has significantly undercut the real cost of making solar panels, making it next to impossible for U.S. companies to compete. Without some sort of trade sanctions then, adding a tariff to Chinese-produced solar panel, for example, a company like Solyndra was at an enormous --- perhaps even impossible --- disadvantage from the start (a disadvantage that got worse over the last several years, as China ramped up it's investment in solar technologies).

As to "free competition", you are right in at least one aspect. We haven't had it here for decades. That's why huge oil companies continue to receive government welfare (despite record profits) and why alternative points of view about it all cannot be heard (thanks to corporate buy-out of our public airwaves which ensure there will be neither competition, nor free exchange of ideas over those airwaves).

As to your Al Gore comment, if you wish to offer substance to it, I'll speak to it. Until then, it appears you have no idea what you're talking about or, more likely, are one of many who have been played for idiots by the fossil fuel industry, and are now happy to play the sucker and do their dirty work for them.

Ara, you should check out Dredd's link in #2 above.

And then go to SkepticalScience.com to educate yourself about what the science really says.

Unless, of course, you're on of those trolls paid by the climate change denial industry to drop rant-y comments. Either way, thanks for helping us make the case that climate science deniers are not only crazy, you're intellectually lazy.