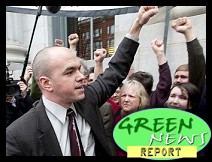 
And this law is not a trivial regulation about crossing t's or dotting i's to make some government accountant's job easier. This law was put into effect to mitigate the impacts of catastrophic climate change and defend a livable future on this planet. This law was about protecting the survival of young generations. That's kind of a big deal. It's a very big deal to me. If the government is going to refuse to step up to that responsibility to defend a livable future, I believe that creates a moral imperative for me and other citizens. My future, and the future of everyone I care about, is being traded for short term profits. I take that very personally. Until our leaders take seriously their responsibility to pass on a healthy and just world to the next generation, I will continue this fight.

It appears that we will not learn the environmental lessons the easy way.