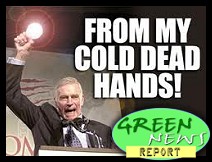 IN TODAY'S RADIO REPORT: Another record heatwave for the Midwest (now with crop failure!); "Carmageddon" becomes "Cartopia"; Australia launches nationwide carbon tax --- World doesn't end; PLUS: Dim bulbs (and Fox "News") fight to build a bridge to the 19th century ... All that and more in today's Green News Report!

"It's clear that our economy isn't weatherproof," Jeffrey Lazo, the study's lead author, said in a statement. "Even routine changes in the weather can add up to substantial impacts on the U.S. economy."

« PREVIOUS STORY "'News of the World' Whistleblower Found Dead, Murdoch Not (But 'Sun' Hacked to Report He Was)"
» Go to The BRAD BLOG front page «
"Kathy Nickolaus' Got a Brand New Bag (& Investigator) and Other WI Election-related News" NEXT STORY »

It seems unfathomable that things have gone downhill since the last green post here Des.

It does not seem to be pure fantasy any more to think that the Earth's ecosystem is being systematically destroyed on purpose.

The "apocalyptic predictions" that global warming will cause ocean rise is no longer prediction.

The first inhabited island in this, the Sixth Mass Extinction, has sunk beneath the waves like Atlantis.

« PREVIOUS STORY "'News of the World' Whistleblower Found Dead, Murdoch Not (But 'Sun' Hacked to Report He Was)"
» Go to The BRAD BLOG front page «
"Kathy Nickolaus' Got a Brand New Bag (& Investigator) and Other WI Election-related News" NEXT STORY »
See MSVL and support BRAD BLOG! Click here for signed premium version!