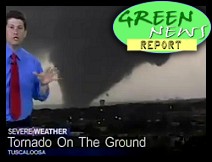 If I were a political leader and a Republican and the Democrats were hellbent on ending Big Oil subsidies and raising taxes on Big Oil in circumstances like we are in now, is it just me? This may be the difference between working in radio and working in politics. I would defend Big Oil! Especially now. We need supply!

Mountaintop removal @ Treehugger is going to some Arabic bullshit.

We'll correct it above...

So are the storms another signal of a pattern of more intense weather events caused by more water vapor in the air and an overall warmer climate world wide, or is it a spiteful god who is punishing the people of the south for coopting religious belief into political denial of the responsibility to be protectors of our God given planet.