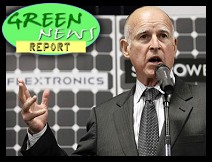 IN TODAY'S RADIO REPORT: California doubles down on clean energy; Obama vows to continue the fight as well in budget speech ... PLUS: Renewables vs. Nukes: More jobs in renewables, so why hasn't the President mentioned that? ... All that and more in today's Green News Report!

A 70% cut to clean energy. A 25% cut in education. A 30% cut in transportation. Cuts in college Pell Grants that will grow to more than $1,000 per year. That's what they're proposing. These aren't the kind of cuts you make when you're trying to get rid of some waste or find extra savings in the budget. These aren't the kind of cuts that Republicans and Democrats on the Fiscal Commission proposed. These are the kind of cuts that tell us we can't afford the America we believe in. And they paint a vision of our future that's deeply pessimistic.
...
Worst of all, this is a vision that says even though America can't afford to invest in education or clean energy; even though we can't afford to care for seniors and poor children, we can somehow afford more than $1 trillion in new tax breaks for the wealthy.

Wind turbine suffers catastrophic failure; no one is irradiated

It is time for some serious green vaccime to be applied widely.