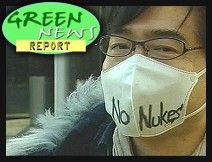 IN TODAY'S RADIO REPORT: Fallout from the nuclear nightmare in Japan leads to a political shift in Germany; Plutonium found in the soil around the stricken Fukushima Daiichi plant; Americans trust the EPA more than Congress... so the GOP attacks the EPA --- again ... PLUS: Questioning America's emergency response to a Fukushima-style nuclear nightmare ... All that and more in today's Green News Report!

The radioactive core in a reactor at the crippled Fukushima nuclear power plant appears to have melted through the bottom of its containment vessel and on to a concrete floor below, experts say, raising fears of a major release of radiation at the site.

Richard Lahey, who has worked on the plant at Fukushima, told the Guardian officials seemed to have "lost the race" to save the reactor, but added that there was no danger of a Chernobyl-style catastrophe.

That is major that the core melted through the containment vessel and onto the concrete floor below.

Melting through the concrete floor and into the earth, water-table, etc. would be next unless they cool the molten blob of a core.

That's right, Dredd, and if true, it's extremely serious. But it should be clarified that the scientists saying that is not on the scene in Japan right now, and there is, as yet, no confirmation that the fuel has melted through the concrete floor of the containment structure ... No one is able to get IN to verify the condition of the containment structures, due to all that radiation.