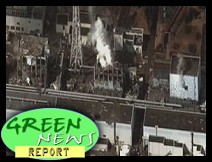 IN TODAY'S RADIO REPORT: Crisis in Japan: Compounding natural disaster, humanitarian disaster, and spiraling nuclear disaster --- desperate measures to hold off a nuclear nightmare ... All that and more in today's Green News Report!

"We don't see any concern for radiation levels that could be harmful here in the the United States or any of the U.S. territories," he told reporters. He said NRC recommended evacuating areas within 50 miles of Japan's stricken reactor as a prudent precaution.

My work here is done. I'm going to drink some green beer to express my support for the environment. Thanks for all your hard work, Brad.