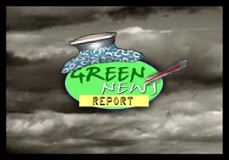 NO RADIO REPORT THIS WEEK: We're on the road this week and, as luck would have it, at least one of us is under the weather to boot. So we'll be taking a very very rare week off from fresh Green News Reports, but will return next week with more independent green news, politics, analysis and snarky comment! We apologize to you, and the planet, for any unforeseen inconvenience....

'GREEN NEWS EXTRA' (Lots of stuff going on even if we aren't covering it!)...