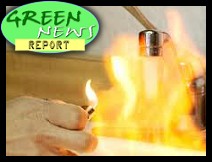 IN TODAY'S RADIO REPORT: Oil prices spike on Libya unrest; Gettin' gassy at the Oscars; Hidden costs of coal; Air pollution deadlier than cocaine ... PLUS: Unrest in the Midwest, powered by Koch (the Billionaire Koch Brothers, that is) ... All that and more in today's Green News Report!

To You Faded Believers Selfishly Scaring Our Kids With: DEATH BY CO2:
In Southern Ontario, the city of London Ontario Canada has not had one single smog day in over 5 years, just alerts to a possible smog day, (a "smog warning").
And you still insist on condemning our children to a death by unstoppable warming? Pollution is real, death by SUV gas was not.
If you faded doomers had any credibility at all, you would stop calling unstoppable warming "severe weather" snowstorms and cold snaps. It's a death threat, not disagreeable weather and we former believers promise you this, history will not be kind to this CO2 evnironMENTAL era.
Has this great source of news reported that the Republicans pulled all American funding from the IPCC on Feb 20th?
Climate change has done to journalism and science what abusive priests and suicide bombers did for religion

BTW, we're not "boomers", and we did report on House Republicans voting to defund the US contribution to the IPCC. Do you ever bother to actually read any of the articles on which you post your duplicate comment spam, over and over and over again?

In your incoherence you apparently don't understand that while Republicans in the House voted for that --- along with many, many other provisions that directly defund the EPA's ability to enforce laws and regulations protecting the environment about which you claim to care so much --- their radical amendments are unlikely to pass the Senate or be signed by the President.

Please avail yourself of the many, many online sources of primary scientific literature to gain a better understanding of the issues we’re talking about. Come back when you have some actual scientific evidence, and are willing to discuss it coherently.

Seriously, why do you bother? (on the other hand, if you're one of the paid trolls, you're doing a great job helping to prove our point! Thanks!)

Here's a doozy! As in radioactive and sometimes just miles upstream from drinking-water intake plants.