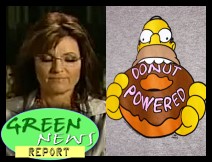 IN TODAY'S RADIO REPORT: From the greenest State of the Union speech ever, to the State of Wisconsin --- Obama calls for clean energy jobs, and as the GOP flip-flop on 'Cap and Trade' continues, Gingrich calls for abolishing the EPA, and Sarah Palin calls on donuts to save the nation... All that and more in today's Green News Report!

Snow fell from Virginia to Maine on Wednesday night and into Thursday morning, putting additional strain on cities and states already faced with overwhelming budget deficits.

« PREVIOUS STORY "Memo to Rahm: 'Appear On the Ballot' May be Somewhat Misleading in Chicago"
» Go to The BRAD BLOG front page «
"Egypt's 'Internet Kill Switch', Democracy via WikiLeaks & Terror 'Made in the U.S.A.'" NEXT STORY »

One million electronic cars on the road by 2035? Is there any reason why we couldn't have double that number by 2012? After all the technology has long existed to produce solar-aided, plug-in electrics with 300 mile range batteries.

The first cars ran on electricity. In 1900, electric cars outsold all other kinds. However, early electric cars could travel no more than a few miles on a single charge.

California-based Tesla motors has developed a passenger vehicle capable of a 300 mile range.

So when Obama says a million electric cars by 2035, he's really isn't saying much, is he?

« PREVIOUS STORY "Memo to Rahm: 'Appear On the Ballot' May be Somewhat Misleading in Chicago"
» Go to The BRAD BLOG front page «
"Egypt's 'Internet Kill Switch', Democracy via WikiLeaks & Terror 'Made in the U.S.A.'" NEXT STORY »
See MSVL and support BRAD BLOG! Click here for signed premium version!