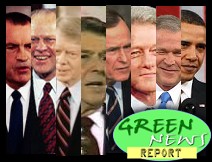 IN TODAY'S RADIO REPORT: Getting "Gas"-y at the Oscars; Freakin' Frackin'; Natural disasters are expensive; Catastrophic flooding, drought around the world ... PLUS: The State of the Union ... All that and more in today's Green News Report!

While it's unfortunate there isn't an Oscar category for propaganda, this nomination is fitting, as the Oscars are aimed at praising pure entertainment among Hollywood's elite.

Claims in the film Gasland have been widely documented to be untrue. See the investigative documents for yourself here: http://anga.us/learn-the.../the-truth-about-gasland

By "widely documented", do you mean documented as such by you the employee of the Natural Gas trade group, ANGA (America's National Gas Alliance)?

And don't you think you should make it explicitly clear that you work for them when you post such paid comments as "Gasland [has been] widely documented to be untrue"?

Thanks for the reminder, however, of how much your industry is willing to deceive the public in order to fight against grassroots citizens and their well-documented concerns about things like their water being poisoned by your industry and catching fire and stuff.