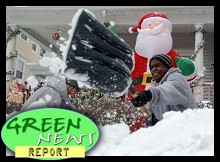 In the coming two years, that may become a more popular approach.

Why Is It So Cold? Should the Big Freeze Alter Our Approach to Climate Change?

We had big storms last year in the midwest. People are supposed to care more about the self-centered east coast's ability to deal with a lot of snow when they don't give a lick about us when we have a blizzard. You live at relatively high latitudes. In the winter it snows. When you live along a coastal area it adds to the moisture level so it might snow more. Get used to it and get over yourselves. You don't care about our weather why should we care about yours.

Please call it climate change and not Global Warming. Don't fall into the trap that the dumb-down echo-chamber has set. If you haven't learned anything from the past 30 years of Republican politics; they try to control the messaging with pithy sayings. Don't use their inaccurate phrasing for things so they can continue to misinterpret it for us and control the understanding (or lack of it) of the public.

We're not on the East Coast (at the relatively low latitude of Southern California), we cover ALL of the natural disasters that hit the entire nation, and we covered the big storms you had last year, and the Nashville floods, the droughts, the crop failures, etc. Of course, obviously it's your right to not give a damn about what happens to your fellow countrymen, but we care, so we cover it because it affects us all.

Re: the terms 'global warming' and 'climate change'... you should be aware that it was the GOP spinmeister Frank Luntz who first advised Republicans to switch from 'global warming' to 'climate change', not the other way 'round. Both terms are scientifically acceptable; regardless, at this point the terms are pretty much interchangeable to the public so it seems rather pointless at this stage to cling to one term or the other out of ideological purity. Of course, you may disagree. Various groups have suggested 'climate destabilization' would more be more descriptive, but I don't see that catching on.

Thanks for the link, Orangutan, but I should point out to our readers that there is much there that is inaccurate or misstated. Such as the claim that scientists predicted an ice age in the 1970s, or that the Loop Current or Gulf Stream has shut down (no evidence of either), or the claim that it's the sun or that the sun's effect on other planets has any relevance to Earth's unique climate system. This is just outright false: "global warming activists say that global warming will win out in the end, that the cold snap is temporary." On the contrary, climate scientists have long predicted a global trend toward more extreme weather events, including snow storms.

There are several excellent articles linked in our post above that explain the mechanisms at work in the recent severe winters in the US, UK, & EU.

As always, we recommend that if you truly want to gain a better understanding of the state of the science, what we know and don't know, what is theory and what is fact, and where the gaps are, then check all explanations from non-climate scientists against the database at SkepticalScience.com, where you can read the primary scientific literature for yourself.

Finally, I'll just say that I object heartily to the author's use of the term "belief": "If you believe in man-made global warming...", as if scientific data is somehow equivalent with belief in Santa Claus or the Tooth Fairy. Facts are based on independently verifiable data, and are not subject to "belief". You may disagree about what the policy responses should be, but that has no bearing on the data itself.