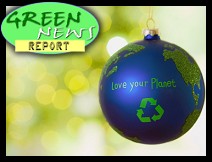 IN TODAY'S RADIO REPORT: Paging Erin Brokovich: carcinogen found in tap water in 31 U.S. cities; California leads the way - again - this time on cap-and-trade; Not to mix metaphors, but there's a silver lining to that lame duck ... PLUS: Having a little fun over Christmas with your climate denier relatives ... All that and more in today's Green News Report!

The study, which will be released Monday by the Environmental Working Group, is the first nationwide analysis of hexavalent chromium in drinking water to be made public.

[I]n the current discussion is that the problem of global warming can be broken down into two parts – the “forcing” part that deals with the difference between the energy input and output at the earth’s surface and the consequences of that forcing. The latter is the huge problem of the feedbacks and their consequences on the distribution of that energy over the globe.