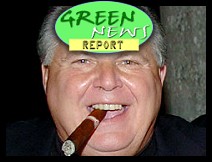 IN TODAY'S RADIO REPORT: Sorry, Rush. You're a liar: November 2010 the hottest on record; Visit sunny, glowing Chernobyl; Midwest blizzard now threatens Florida's crops; PLUS: A New and Improved climate agreement! Now with more U.S. and China! ... All that and more in today's Green News Report!

As delegates to the latest U.N. climate talks struggled to come up with a modest pair of global warming accords, governments, businesses and individuals working behind the scenes forged ahead with their own projects to cut emissions.

« PREVIOUS STORY "McGovern to CNN on WikiLeaks' Assange: 'You Should be Following His Example'"
» Go to The BRAD BLOG front page «
"'Collateral Damage' or Intended Targets?" NEXT STORY »

« PREVIOUS STORY "McGovern to CNN on WikiLeaks' Assange: 'You Should be Following His Example'"
» Go to The BRAD BLOG front page «
"'Collateral Damage' or Intended Targets?" NEXT STORY »
See MSVL and support BRAD BLOG! Click here for signed premium version!