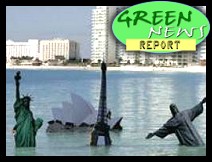 IN TODAY'S RADIO REPORT: Crunch time in Cancun as the UN climate summit races to a close; Major moves in the US over coal, oil and emissions ...PLUS: More WikiLeaking: from Nigeria (who loves both Shell and Dick Cheney!) to Canada to BP ... All that and more in today's Green News Report!

William K. Reilly, co-chairman of the National Commission on the BP Deepwater Horizon Oil Spill and Offshore Drilling, also plans to say that BP and two other companies involved with the doomed Macondo well—Halliburton Co. and Transocean Ltd.—made "breathtakingly inept and largely preventable" missteps, according to a copy of his prepared remarks viewed by The Wall Street Journal.

They keep spinning lies based on proven fraud science ,c02 is 2 parts oxygen 1 part carbon so in effect they are taxing oxygen and every imaginary ton estimated by the radicals is only 1/3 of a ton of carbon so they are even running a con on that ,its a takeover of western economies worse than Hitler ,and in the emails it showed it was the green scammers that were funded by big oil ,Shell ,Exon ,Shell so they were lying on that too .

Ummm, thanks for your comment, Terry, but ... no, none of what you've written is actually true.

If you're interested in updating your scientific literacy to encompass things that are actually real and verifiable, go to SkepticalScience.com for simple, easy-to-understand explanations of all your denier arguments.