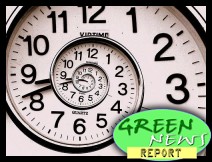 IN TODAY'S RADIO REPORT: Happy birthday, EPA! Now die! (Same to you, FDA!); Huge food safety overhaul passes in the Senate (maybe); Updates from the international climate summit in Cancun ...PLUS: USA's 'Sputnik Moment' --- Losing the race for clean energy ... All that and more in today's Green News Report!

Including my own. As I relayed in my introductory post here, I grew up in a community where “affordability” was a code word for low income and high pollution.

A set of papers from the United Kingdom's Royal Society takes a look at the implications of the current path in a new set of reports. If action isn't taken, they conclude, the world is likely to warm 4 degrees Celsius (7 degrees Fahrenheit) in the next 50 years. Despite the political goal of 2 degrees drafted in Copenhagen last year, the continued rise in emissions and the delay of a legally binding deal, the researchers conclude, means the world is going to exceed that goal.
...
[N]ew findings about the impacts of a 2-degree rise indicated that the goal"now more appropriately represents the threshold between 'dangerous' and 'extremely dangerous’ climate change."

« PREVIOUS STORY "Exclusive: Ellsberg Disagrees With WikiLeaks' Assange on Whether Clinton Should Resign"
» Go to The BRAD BLOG front page «
"Colorado Independent Picks Up on Our Ellsberg Interview, Highlights Points on Manning, Yemen..." NEXT STORY »