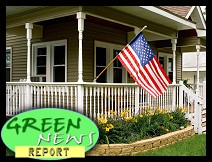 "To summarily bar such claims from entering the courthouse would be a profound miscarriage of justice," wrote Boyle, who represents the U.S. Eastern District of North Carolina.

« PREVIOUS STORY "Philadelphia 'Freedom': Voter Forced to Swear on Bible Before Casting Vote in Mid-Term Election"
» Go to The BRAD BLOG front page «
"Lithwick: 'There is No Getting Past Torture. There is Only Getting Comfortable With It'" NEXT STORY »

Speaking of green news . . . is it just my imagination, or does renowned scholar & gentlesomething Ann Coulter really not know the difference between incandescent and compact fluorescent light bulbs?

« PREVIOUS STORY "Philadelphia 'Freedom': Voter Forced to Swear on Bible Before Casting Vote in Mid-Term Election"
» Go to The BRAD BLOG front page «
"Lithwick: 'There is No Getting Past Torture. There is Only Getting Comfortable With It'" NEXT STORY »
See MSVL and support BRAD BLOG! Click here for signed premium version!