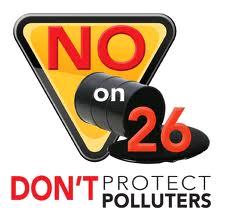 If the just released Los Angeles Times/USC poll is accurate, California voters have been able to appreciate that, despite its Orwellian label, "The California Jobs Initiative," Proposition 23 is nothing more than a scam advanced by industry polluters which would destroy both jobs and the environment.

Prop 23 represents a frontal assault on Assembly Bill-36, a landmark piece of bi-partisan green energy legislation, passed by a Democratic-majority state legislature, signed into law by a Republican Governor. That voters have come to recognize Prop 23 as a scam comes as no real surprise, especially since the "No on 23" campaign, courtesy of several Silicon Valley tycoons, raised more than $28 million to more than offset the $9 million spent by the industry polluters --- two Texas oil companies, Valero and Tessoro, along with the infamous Koch Industries --- in support of this oily and deceptive initiative.

Setting aside what this says about the sorry state of our electoral process in which the public must rely upon white-hat corporate donors, as opposed to the mainstream media "news" for the information vital to informed consent, the open question remains whether the public will be taken in by the more subtle, Chevron/Exxon-Mobil/ConocoPhillips/Occidental Petroleum-backed Proposition 26 --- what Bill Magavern of Capital Weekly aptly described as "The Polluter Protection Act", especially in the face of the slick and deceptive industry ads (see video below) used to advance the measure...

The act assessed fees against manufacturers to specifically offset the cost of mitigating the harm caused by their products.

In Sinclair Paint Co. v. State Bd. of Equalization, industry challenged the Act, contending that the "fee" was actually a "tax" and, as such, was not valid because it had not been passed by a 2/3 majority of the Legislature.

The argument was rejected by a unanimous California Supreme Court, which described the Act as containing a "bona fide regulatory fee":

It requires manufacturers and other persons whose products have exposed children to lead contamination to bear a fair share of the cost of mitigating the adverse health effects their products created in the community.

The court went on to note California's police powers were "broad enough to include mandatory remedial measures to mitigate the past, present, or future adverse impact of the fee payer's operations."

A question of who should pay

In his excellent article, Bill McGavern aptly described the issue at hand:

The core question raised by Prop 26 is: who pays? Who pays to clean up air pollution, oil spills and toxic waste? Who pays for the health consequences of tobacco and alcohol addiction, of lead poisoning and diesel exhaust? Exxon, Phillip Morris and the other special interests behind Prop 26 want you, the taxpayers, to pay. They want to get off the hook for mitigating the damage they do.

Where the ad (below) deceptively suggests that taxes are being leveled against ordinary citizens, Prop 26 would actually saddle taxpayers with costs that should be borne by industry polluters. Where the ad suggests that politicians pass these "fees" to pad their own expense accounts, in actuality the fees are designated for a specific purpose --- mitigating the damages these corporations cause.

Hopefully, there are only a select few naive enough to believe these corporations would pass the money they avoid paying in "fees" onto consumers, as opposed to over-inflated CEO salaries.

Seeing through the Prop 23 deception

While a Public Policy Institute of California (PPIC) poll reflects a much higher percentage of opposition to the other deceptive ballot measure, Prop 23, amongst college graduates, 55%, as compared to 37% for those with a high school diploma or less, a statement made by 45-year old truck driver, Tobias Martinez, in relation to the more recent Los Angeles Times/USC poll underscores the importance of exposing who the corporate backers are:

"When you see that they are funding it, it begins to look like this is something just to benefit them. They want to be able to produce more pollutants.... It doesn't make sense that stopping the improvement of air quality would create jobs."

The absurdity of calling Prop 23 a "California Jobs Initiative" was actually underscored by the gaping hole in the argument presented by Meg Whitman during the third Whitman/Brown debate. Whitman suggested that since only 3% of California jobs fall within the green technology sector, a one year moratorium on AB-36 --- which doesn't kick in until 2012 anyway --- should be imposed to save the other 97%.

Of course, the fact that 3% of the work force is now involved in the production of clean energy by no means suggests that 97% are engaged in the production of dirty energy. To the contrary, most jobs, doctors, nurses, police officers, fire fighters, teachers, food service workers, and on and on, have nothing to do with energy production. Clean energy technology offers a major source of new jobs that do not now exist.

The same corporate wealth which is backing Prop 26, has funded a slick campaign against CA's Proposition 25. Despite that, the same Los Angeles Times/USC poll reveals that 58% of California voters support Prop 25, a measure that would replace the 2/3 voter requirement for budget passage in CA with a simple majority --- ending what we described in "Engineering California's Economic Collapse" as the ability of a minority of Republican legislators to hold the state hostage in order to advance their radical-right privatization schemes.

PROP 26 is just destructive as PROP 23. Prop 26 is a treacherous, Big Oil rip-off, which "passes the buck" from oil corporation, clean-up fees to the public's taxes, which will pay the oil recycling fees, the materials hazards fees and other fees. If you do not understand the ambiguities and the intrigues behind Prop 26, then, vote no. Power to the people. Exxon Mobil, BP and Shell are silent partners behind Prop 26.

Oh, hey all! And for more fun news (slightly offtopic, but not) I jumped to the frumforum article on joe (the thug) miller's job misbehavior, and lo and behold, an article stating CLEARLY that Alaska's oil reserve potential estimate has been reduced by 90%!!! You mean, you mean?!? So, one commenter on this 'highly regarded' 'conservative' site (as praised by our dear friends at Politic, so...) Recommended using polar bear blubber instead. Anyway, if the TRUTH is coming out on Frum's site (October 27th) why haven't I heard progressive voices bringing this up? I don't listen to Green News, I'll admit, because I usually end up a little, um, suicidal after a short spurt of hearing all the good news, but this is actually MAJOR. So, if the oil companies have to go 7 miles out from the coast to capture oil, and there ain't none in Alaska worth the cost of drilling, and BP has just poisoned, oh, let's say, 30% of the US fisheries, waterways, marshes, etc., does this mean maybe, we really are almost at the end of the line for 'Big Oil'? May I ask what the plan might be? We need so much more oil than there is, there has been almost no effort to 'green' the power grid, and... Hmmm. Which country is it that converted from oil to renewables? Brazil? Wonder what the airfares are... OK. I guess I better go back to napping again. Better than the alternative, I spose. (And Brad, I ain't forgot my promise-a check is coming your way very soon...

Brown will likely (inexplicably) win in California. 25 will likely pass which on the surface seems like a good thing. And then Californians will be faced with unchecked left wing extremism in the assembly, senate, and Governors mansion.

Didn't we just figure out that was bad in DC?

"unchecked left wing extremism ... Didn't we just figure out that was bad in DC?"

Um, no? Unless by "left wing extremism" you mean the largest middle class tax cut in history, corporate giveaways instead of healthcare for all, expanded wars, expanded Executive imperialism, expanded use of State Secrets Privilege, refusal to allow for constitutional equal rights of homosexuals, crackdowns on illegal immigration, coverups of torture, continued loss of Habeus Corpus and refusal to grant trials to those held years without charges, Republican U.S. Attorneys kept in place, refusal to hold corporate and government criminals accountable, refusal to hold war criminal accountable, expansions of Nuclear energy and off-shore drilling ...

Is that what you mean by "left wing extremism"? If so, then yes, I agree. We've figured out that was bad.