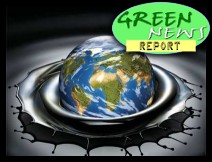 IN TODAY'S RADIO REPORT: OILpocalypse Now: After 'top kill' fails, BP begins next new plan in the Gulf, as Obama calls for accountability ......And what about just bombing it?... PLUS: Crackdown on coal mines, sinkholes in Guatemala, and sneaky corporate anti-clean energy propositions in California ... All that and more in today's Green News Report!