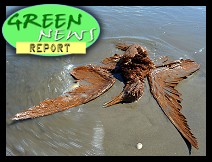 IN TODAY'S RADIO REPORT: New Rules for truck mileage; King Coal on the Congressional hot seat.... PLUS: Beyond Patience: Tough talk from the feds amid new accusations of corruption, as the gusher keeps on gushing, and now NUKES(?!) --- nobody in government seems to be getting the message... All that and more in today's Green News Report!

'GREEN NEWS EXTRA'
(Stuff we didn't have time for in today's audio report)...