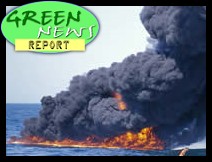 IN TODAY'S RADIO REPORT: More on Lindsey Graham's climate legislation hissy fit; A rapper's astute analysis of the climate bill ... PLUS: As the Gulf's oil rig spill spreads, setting the ocean on fire --- not kidding! ... All that and more in today's Green News Report!

NATURE Magazine publishes paper denying CO2 responsible for warming!
By Fred Dardick Friday, April 30, 2010
Nature Magazine, the academic journal that introduced the world to X-rays, DNA double helix, wave nature of particles, pulsars, and more recently the human genome, is set to publish a paper in June that shows atmospheric carbon dioxide (CO2) is responsible for only 5-10% of observed warming on Earth.

As explained by the paper’s author Professor Jyrki Kauppinen, “The climate is warming, yes, but not because of greenhouse gases.”

DES and Brad- it's a scam to get their carbon trading scheme to go global. Don't you get it? It is just like EV- seems to make sense- but a terrible blow to democracy.
All The Best

Cauldron, three things: first, links are helpful so that other people can assess for themselves the veracity of the claim that this paper actually says what the blurb says it says. Here's the link you didn't include in which Fred Dardick discredits himself by referencing the thoroughly debunked and utterly discredited Oregon Petition. [more here: Debunking the Oregon Petition; SourceWatch: Oregon Petition; The The Oregon Petition People Have Misrepresented Their Own Petition.)

Secondly, as you note, Nature, contrary to the deniers' claims, includes legitimate peer-reviewed research even when it presents data contrary to the consensus. And there is a consensus, Cauldron. Thanks for demonstrating that Nature does not censor opposing data or viewpoints.

And a point of logic: if it's all a scam (which you realize, of course, would require a global conspiracy of tens of thousands of scientists), then why would Nature publish anything that risks their plan for global domination of carbon trading?

The other point is that one paper, now matter how revelatory, can only add to the total understanding of how our biosphere works, and that is always welcome when peers judge the data and conclusions to be sound. But it is wishful thinking to believe one paper can suddenly overturn the body of evidence from multiple lines of data across Earth systems disciplines.

Seriously, give it a rest. If your main story presents easily disprovable bullshit like the Oregon Petition as legit evidence, you might as well save yourself the time.

BTW, Cauldron, if you're not getting paid, you may be an unwitting tool in spreading known disinformation: