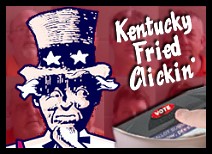 Meanwhile, back in Clay County, Kentucky, where election officials (including the county clerk, a district court judge, and the school superintendent) were arrested last year, and are now on trial, accused of having "fix[ed] elections for decades," a "precinct worker testified...that top election officers in the county taught her how to change people's choices on voting machines to steal votes in the May 2006 primary." The vote stealing was accomplished on ES&S touch-screen electronic voting machines, without the knowledge of legitimate voters, after they'd left the booth thinking they had cast their votes.

The scheme also included Republicans changing their party registration to Democratic in order to serve as Democratic poll judges and officers on Election Day, as has been alleged elsewhere (for example, in Ohio in 2004)...

As Bill Estep at the Lexington Herald-Leader recently reported:

FRANKFORT --- A former Clay County precinct worker testified Friday that top election officers in the county taught her how to change people's choices on voting machines to steal votes in the May 2006 primary.

The scheme involved duping people to walk away from the voting computer before they had finished their selections, then changing their choices, said White, the Democratic judge in a precinct in Manchester.

White said she stole more than 100 votes that election.

"It was easy done," she said.
...
White, who is in her early 40s, said she agreed to help the FBI in return for not being charged. That deal requires her to testify truthfully, she said.
...
White said Maricle, then the circuit judge for Clay, Jackson and Leslie counties, asked her to switch her registration from Republican to Democrat and serve as an officer in a Manchester precinct in the 2006 primary.

Maricle's son-in-law, Phillip Mobley, planned to run for property valuation administrator that year. Her understanding was that Maricle wanted her to work inside the polling place to help rig the election for Mobley, White said.

The vote-buyers took advantage of some confusion caused by new voting machines the county had that year, White said.

The machines had a "Vote" button that people could push to review their choices, then a second button they had to push to record the choices and finish voting.
...
Thompson and Jones used a voting machine to show her and Charles "Dobber" Weaver how to change votes, White said.

White said they did that at the clerk's office after legitimate training for all election workers. She and Weaver stayed late to learn how to manipulate the machines.

Weaver, then the Manchester fire chief, was the Republican judge in the precinct where White was the Democratic judge in May 2006.

Last year, following the arrest, we explored the issue of whether the conspirators were Republican or Democratic and whether it actually matters here. It doesn't, in truth. Democrats can as easily game these systems as Republicans. It is, as we've always contended, not a partisan matter.

Nonetheless, as we saw in Ohio after the 2004 Presidential Election debacle in that state, Republican officials often cited "bi-partisan" election commissions to support their contentions that any wrong-doing would be discovered by officials, so no oversight or investigation was necessary --- even as there were allegations that some of "Democratic" officials were, in reality, Republicans.

Beyond that, e-voting vendors, apologists, and denialists had long claimed that those, such as The BRAD BLOG and computer science and security experts across the country who had argued such systems were anything but secure, were wrong and that e-voting was perfectly safe. When they were shown otherwise, time and time and time and time and time again, their fallback position became, essentially, 'while it might be possible to manipulate votes on electronic voting systems, nobody ever had."

As we also detailed last year after the Clay County arrests, that contention by the denialists in support of e-voting was pure conjecture, as the evidence that might reveal the manipulation of election results by election insiders has been routinely and "legally" withheld from citizens by voting machine companies claiming "proprietary" ownership of data and source code.

But in Kentucky, finally, we see a case of exactly that occurring. In this case, it wasn't a manipulation of the central tabulator --- which can be done by a single person within seconds, as scientists have long shown --- but rather by a cabal of conspirators who did so at the actual voting machines themselves.

The last gasp for the e-voting denialist industry in support of these insane, undemocratic systems, fell in Clay County, Kentucky, as of last year. And yet, virtually the entirety of the U.S. still uses these unobservable, easily-hacked, unverifiable voting systems made by private, unaccountable companies, using secret software, to count our elections to run "the world's greatest democracy."

* * *
The BRAD BLOG covers your electoral system fiercely and independently, like no other media outlet in the nation. Please support our work with a donation to help us keep going (Snail mail, more options here). If you like, we'll send you some great, award-winning election integrity documentary films in return! Details right here...
Tweet
Reader comments follow below ad...

What's that? Did you say that a Republic official admitted in open court that she switched parties in order to alter votes and then committed "election fraud" by tampering with ES&S touch screen DREs?

I'm sorry, I was having difficulty hearing you amidst the background noise emanating from the hard-right echo chamber about non-existent ACORN voter fraud being carried out by dead people; can't see it either --- my screen is filled non-stop with phony pimp videos.

Gee, you'd think this would be plastered all over the liberal media.

Soooo, where is the outrage from Fox News? CNN? ABC?

They did wall to wall coverage of ACORN, surely they will do the same for this story? Hellooooo? Is this thing on?

Is anyone here willing to dress up as a pimp and fake dubbing questions and answers by Wanda? Maybe drawing a mustache on President Obama and calling him Hitler will do the trick?

Coincidentally, Jim Bunning is from Kentucky.

So I guess they got to keep all the hillbilly(Oxycontin) heroin they had been handing out for votes when they started using their ES&S touch screen voting machines?

It has always been a big mystery to me that the so called Progressive sites won't touch this subject with a ten foot pole.I am sure Brad knows the answer .

I don't believe in coincidence.

The book should be out soon...

Well at least they can't say electronic voting fraud has never been proven now, even though this doesn't come close to exposing the corporate secret source code, central tabulation, and memory card access problems.
I agree Molly #7. Progressives could really get alot further alot faster by forcing MSM to cover this issue. They are at the table without the strongest uniting card in their hand.

So is Mitch McConnell..whose wife Elaine Chao ,as Secretary of Labor was the worst enemy the American worker EVER had.

That's another reason the NeoCONS went after ACORN -because ACORN endorsed EFCA-which at one time,Obama did,too.

Idiots, there is no right there is no left. There is power and money, and there are idiots.