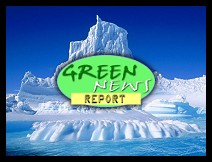 IN TODAY'S AUDIO REPORT: Flooding around the world; Icebergs in New Zealand?; The not-so-great drywall of China; No 'amore' for foreign nuclear waste ... PLUS: Climate scientists' emails --- hacked! ... All that and more in today's Green News Report!

CORRECTION TO OUR AUDIO REPORT: The hacked emails referenced in our report today were from the Climate Research Unit at the University of East Anglia, not the Hadley Center, which is a separate institution.

PLUS: Have a 'greener' Thanksgiving!....

) but of interest to bradbloggers... Marcy Wheeler beats on ACORN...

"There's no funding by nefarious groups"
The current Big Brother UK government is as about the most nefarious of groups I can think of right now. Where do you think most of the funding comes from for the CRU grants?

"There's nothing hidden, no manipulation"
The programmers code suggest otherwise.

"It's just scientists talking about science"
And distorting the peer review system to match.

I so appreciate the work that bradblog has done towards election integrity. It is a pity the integrity of the science behind AGW does not matter so much. The scientific method says that when the model does not fit the data then the models need to change...NOT THE DATA!

Thanks for commenting, xham. Got any links to explain what you're talking about to our readers? Like, say, to the "programmers code" that "suggests otherwise"? Seriously, hadn't heard that one before.

Some links to recent peer-reviewed studies that show the models are all wrong would also be great, or anything to support the assertion that thousands of earth systems scientists have really just been pretending to compile data and studies, and manipulating the peer-review process in order to perpetrate an elaborate, decades-long hoax.

So far, RealClimate.org (where some of those scientists write) has gone through many of the remarks that the professional deniers have taken out of context from those hacked emails, and explained the actual context. (They wrote the original emails, so they oughtta know)

It's also interesting to note that no one in the AGW-denier brigade has come up with an actual 'smoking gun' --- just isolated words and phrases that "suggest" (their words, not mine) that it's all an elaborate ruse. Would love to see something --- anything --- that would stand up as evidence of actual collusion, rather than just the "suggestion" of it.

There's also that pesky Nature problem, where natural events persist in occurring in line with those 'pretend' predictions those scientists made --- independently of any email or human hoax. Things like ocean acidification, accelerating melt rates in glaciers and ice shelves, documented accelerated sea level rise, the last ten years being the hottest on record, etc. --- how are those explained by these hoax-y emails?

We take the integrity of data very seriously, whether it's election reform or climate science. So, if you could post some links so can all see what you're referring to, that would be great. Thanks.

Des,what the e-mails reveal, despite how you would like to spin it, is that the peer review process is rigged, the consensus is rigged, the tree ring data is rigged, the FOIA process is rigged. Show me a group of peer review scientists who do not have a vested interest in making sure any decade long cooling is hidden. The evidence that it even warming at all is highly doubtful, and certainly no where near the IPCC hockey stick predictions from AR4. There isn't anything unusual about ice melting...pictures of Kilamanjaro and the North pole from half a century ago suggest there was less ice then than now. Most of the artic ice extent is back to normal. The Antartic has gained more ice on its eastern side than the volcanic prone western side. If you want links then start by watching Lord Monkton's video presentation...it is full of links to this and many other inconvenient truths. Also with many links is http://www.kusi.com/weather/colemanscorner (from the founder of the weatherchannel).Coleman especially has a revealing insight into Roger Revelle, who before his death, apologized at the Bohemian Grove before many dignitaries that the models of AGW (that he originated) are basically wrong. Gore was mentored by Revelle, and when he received the Revelle award, never bothered to mention this reversal in his mentors opinion.

As to relying on the peer review process, that is like asking Sequoia to publish an article critical of election integrity!