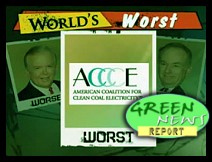 Welcome aboard to our latest new affiliate station - KJFK 1230am in Reno, NV!

IN TODAY'S AUDIO REPORT: Lights out for Brazil; the Brown Pelican is saved!; America's lakes, not so much; A new threat to your sex life ... PLUS: Clean Coal lies --- about veterans --- on Veteran's Day! ... All that and more in today's Green News Report!