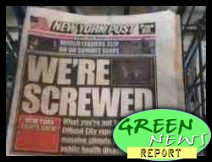 IN TODAY'S AUDIO REPORT: NYPost & Rupert Murdoch get punked!; Global recession --- bad for your wallet, good for the environment; Former Bush Interior Secretary under investigation; Grizzlies get protection --- but Tuna, not so much ... PLUS: The President talks climate at the U.N. ... All that and more in today's Green News Report!