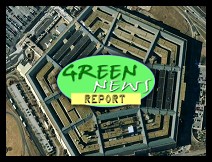 IN TODAY'S AUDIO REPORT: Climate change a threat to national security; Heat wave in the Arctic leads to accelerated melting; Former Governor Sarah Palin, denied; EPA comes clean ... PLUS: 230 miles per gallon? It's on the way... All that and more in today's Green News Report!

The 230 mpg is based on city driving only --- the new draft standards from the EPA are based on statistics showing that MOST Americans commute less than 40 miles per day, so if Volt owners are typical Americans with typical driving habits, they will rarely have to fill up.

The Volt's small gasoline engine on board recharges the battery, so those driving farther than 40 miles in a day won't get stranded. I'd also like to see info on how it works for long trips --- if you're driving cross-country, for example, how often would you need to fill up? Haven't seen that info because I haven't looked.

Rachel Maddow covered the Volt with an automotive journalist, who pointed out that the really high mpg assumes hyper-efficient driving, and not using energy-draining systems like the air conditioner or heater, which would logically reduce the overall mpg.

Even with those details added to the story, it's still impressive and long overdue for Americans to finally have some energy-efficient innovation!