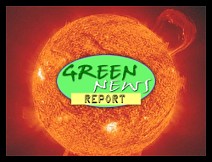 IN TODAY'S AUDIO REPORT: Will the climate change in the Senate over climate change legislation?; ExxonMobil pays up & pays out; Universal cell phone charger for the EU, but not for you!... PLUS: Nuclear Power vs. Summer...All that and more in today's Green News Report!

Got comments, tips, love letters, hate mail, hot nukular reactors? Drop us a line at GreenNews@BradBlog.com or right here at the comments link below. All GNRs are always archived at GreenNews.BradBlog.com.

IN 'GREEN NEWS EXTRA' (links below): Concrete experiment eliminates storm drains & protects water supplies; UN wants to control the grab on agricultural lands; Study finds danger from "inert" ingredients in weedkiller Roundup; Swine flu shows no sign of letting up in the U.S..... PLUS: Generating power from your supermarket parking lot (in the UK, not here)...

I picked up your Green News Report from Buzzflash.com It's pretty good. I went to Bradblog.com a lot during the elections, but I've never listened to the Green news report before. I'll be back. Thanks for all you do. I'm glad you're still hanging in there.

Thanks, Pat. Glad ya found us! (And thanks to the good folks at BuzzFlash for that!) I much appreciate the kind words. Please don't be a stranger!

I would hope one day you'll cover the green radicals over at www.brightneighbor.tv!

Brad when are you going to cover the only solution to global warming which is nuclear power? It's about time people learned the facts and stop believing the myths instigated by the fossil fuel industry.

I posted the following reply on another blog but it's worth repeating here. people should look at the links and listen to the podcasts to learn the facts about nuclear power.

Whether you believe in the research in global warming might not matter. We need to replace fossil fuels especially coal. Coal plants, besides emitting carbon dioxide also emit other toxic chemicals that kill at least 30,000 people each year.

They also emit radiation that's contained within the coal they burn. You can actually get more energy from coal if you use the uranium and thorium fuels contained in them in a nuclear reactor than from actually burning the coal in coal plants.

If we built the nuclear plants that we were going to 30 years ago, then today we wouldn't be emitting any carbon dioxide from fossil fuels. That's ZERO CO2!! Guess what stopped us from building them? Here's a hint: AMORY LOVINS and President Carter. Amory Lovins convinced Carter that we should use coal instead. Now who do you think Amory Lovins works for?

We could use LiFTR nuclear power plants to provide all our energy for over a million years for the whole planet and that's means enough energy everyone in the world wants, clean non-polluting green inexpensive energy. You can't do that with solar energy or wind energy or the ridiculous idea of "carbon sequestration". Why do so many scientists take the idea of pumping monumental huge CO2 into the ground or oceans?! Seriously! That's science fiction.

Here are some podcast shows called the Atomic Show that have some interviews/talks with some of the people behind LiFTR reactors and other topics:

The Atomic Show #121 - LFTR with Kirk Sorensen and Charles Barton

This one is, in my opinion, about why Harvey Wasserman is an idiot
The Atomic Show #126 - Wasserman v Moore moderated by Goodman and Adams

There are over 100 episodes to educate yourself about the realities of nuclear power and dispel the myths.

Here is a website about these LiFTR nuclear power plants:
http://thoriumenergy.blogspot.com

Here at GNR we focus on genuine topical news events and innovations, and do not endorse or promote any one energy technology or resource.

You incorrectly characterize the ban on using reprocessed nuclear fuel in the U.S., which was enacted by Presidents Ford and Carter to prevent the spread of nuclear weapons. President Reagan partially lifted the ban but did not restore the enormous taxpayer subsidies that would be required to become commercially viable.

You also mischaracterize the nation's reliance on coal, which was well-established long before President Carter --- in the 19th century before anyone knew nuclear energy even existed.

You have posted your information here several times, so our readers have ample opportunity to follow your links and get more information.

DES Thanks for your reply to my reply. I haven't mentioned "using reprocessed nuclear fuel" so I didn't incorrectly characterize it.

The LiFTR and Generation IV nuclear reactors ARE innovations. I haven't been following GNR closely but from the links I see you do endorse a few energy technologies that are popular in the media and you probably don't realize it but who benefits is the fossil fuel industry cause solar and wind energy can't deliver the supply demanded.

Here's a topical new event for you about the World Wildlife Federation trying to deceive people about nuclear energy. Don't know if you covered this yet. David Walters covered this at his Daily Kos diary http://www.dailykos.com/...-and-nuclear-fact-fixing

"WWF does not consider nuclear power as a viable policy option, due to its costs, radiotoxic emissions, safety and proliferation impacts. In this report focusing on climate policies, a policy approach that favors the use of nuclear
power is hence adjusted. The indicators emissions per capita, emissions per GDP and CO2/kWh are adjusted as if the generation of electricity from nuclear power had produced 350 gCO2/kWh (emission factor for natural gas).
A country using nuclear energy is therefore rated as a country using gas, the most efficient fossil fuel."

The World Wildlife Federation doesn't like the fact that nuclear energy doesn't emit any CO2 so they change the facts. Welcome to the dark ages.

Konstantin, you appear to misunderstand the nature of news reporting. Reporting does not constitute endorsement. Period.

Thanks for your suggestions.

DES you're welcome for the suggestion. May I make an observation? In today's world maybe you misunderstand the nature of groups spreading misinformation as though they were "news". You look closely and report the misuse of science by groups against mitigating global warming however you don't seem to be reporting the erroneous info spread by environmental groups such as WWF. I realize there's alot of things to cover and this is only a small segment of this blog but I suggest you be more objective and do some investigating into the misguided "Green" advocates. You may find some of them are just as shady as the too big to fail banks.