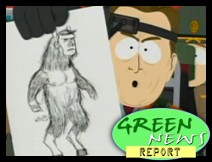 Got comments, tips, love letters, hate mail, ManBearPig sightings? Drop us a line at GreenNews@BradBlog.com or right here at the comments link below. All GNRs are always archived at GreenNews.BradBlog.com.

I say let swine flu run its course, god sent it for a reason?!

God, by the way, is the Chairman of Smithfield Foods, the factory hog farmers who created such a filthy cesspool in the Perote Valley that it sickened over 60% of the local residents, and waaaaaaay more of them died than is being reported on the MSM... before it went global from the Easter Holiday crowds in Mexico. It seems thus far to be less lethal everywhere else, and the lethality is dropping in Mexico since they sprayed for the huge swarms of vector flies that were hatching from the slough full of pig corpses, pig offal, pig blood and pig manure. I hope God's pants get sued off him and everyone in his company is banned from gainful employment for the rest of time.