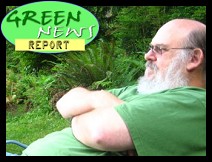 Got comments, tips, love letters, hate mail, unfortunate puns on pork and swine? Drop us a line at GreenNews@BradBlog.com or right here at the comments link below. All GNRs are always archived at GreenNews.BradBlog.com.

Some environmentalists, however, were disappointed by Salazar's move, arguing that more needs to be done and that the federal government has failed to enforce for decades its rule governing mountaintop mining practices.

The ongoing dispute centers on a 1983 law that bars mining operators from dumping piles of debris --- which stem from blowing off the tops of mountains to get to the coal --- within 100 feet of any intermittent or permanent stream if the material would harm a stream's water quality or reduce its flow.

« PREVIOUS STORY "Breaking: Specter Switches Parties"
» Go to The BRAD BLOG front page «
"Bush Then: 'War Crimes Will be Prosecuted...No Defense to Say, 'I was Just Following Orders''" NEXT STORY »

Oh, crap, you guys, I'm becoming addicted to the Green News Report, but, damn, I don't see how we can help but disappoint on the Daily Voting News front. Who on earth is as stalwart and careful and faithful and determined as John Gideon was? I'm just crestfallen. I know there are many dear and great election integrity advocates who will do as good a job as possible, but it can't ever be as solid and detailed and steady as John's.

I think we have to change the name of it. Or the logo. Something. And make a special button for John's stuff.

We won't disappoint him, but we also can't replace him.

I know, 99. He was unique in all the world, simply irreplaceable.

I don't know what we'll do. Muddle through somehow, I guess. Ellen Theisen, his partner at Voters Unite, posted in the Daily Voting News box today that she's talking to others about how, and in what form, to try to continue John's very important work.

While it is definitely saddening to see the loss of a great progressive, it should remind us all that one person can make a difference, and that we should all pick up the slack where John left off! Let's all be John Gideon from now on!

Thanks for a great service in the Green News!

If you're interested in joining an internet forum based on ideas for a Green Energy Future, check out my website!

About the swine flu, what bugs me is that are genetic pieces from several spiecies. I'm certainly not an expert but, in micro we were taught viruses don't jump from speicies to speicies generally. The chances of spontaneous mutation containing all the different strains I would have to believe is astronomical. I have heard no reporting on this except this article and the reuters link on the bottom:

It seems to me the same old media hype without reporting the science of how it could have originated makes some people alot of money while distracting from uncomfortable house cleaning, especially in light of the unresolved anthrax crap.

Wired magazine says it's only two strains of swine virus and you are definitely going to want to follow the links at that piece.

Thanks for the interesting links, guys! The Wired article 99 links to above says that the scientists quoted tested a strain found in California, but the Mexican strain hasn't been genetically sequenced yet.

If there's a difference between the two locations, that might explain why the Mexico strain is so much more virulent, whereas sufferers in the U.S. seem to have only mild symptoms so far... it's a fascinating medical mystery.

Even if this outbreak seems overhyped in the media, one of the good things is its given the world a sort of dry-run rehearsal of pandemic preparedness protocols (say that three times fast), enabling everyone to see where response can be improved. Because public health experts say it's not a matter of "if" but "when" the next pandemic will occur.

I've been doing a whole lot of work looking into this mess as best I can for the last week, and my theory is that the discrepancies in severity probably have more to do with viral loading than different strains breaking out simultaneously.

It really looks as though that factory farm in the Perote Valley may well be Ground Zero, and the conditions there, and the outrageously huge swarms of flies, and the fact that so many of the locals worked there, would indicate that people in that area and extending into Mexico City would be coming into contact with vastly more of the virus than those just passing through or picking it up in places far flung.

Since our screening for it is so behind the curve, though, and there could be so many people picking up such mild cases that they don't even suspect that's what it is, we could be building up ugly viral loads all over the place and this might explode just as we are starting to breathe easy about it.

I'm so glad it seems not to be as harmful anymore, and that the cases didn't double again overnight... though I'm not sure if this reflects the status of the virus or the status of the testing... but this really has been a great opportunity to see our new administration in action.

They get a sold F from me, so far. It has taken them a week to do precious little more than set their shipping clerks to work and figuring out something less inflammatory to call it. It was only yesterday that there was any indication the agencies would send people to the heavily probable source to determine anything, and I don't even have any faith that they will inform us if they confirm that factory pig farm was indeed the source.

And, as is becoming a regular feature, Tom Philpott goes me one better on the matter. I'm getting a crush on him, Des. Big time.

Thanks 99, great article! I wonder if Spain or the UN would care to investigate this too?

Interesting note: last night a friend of mine recalled a story from 2005 about Rumsfeld's connection to the makers of TAMIFLU.
Googled it. Dropped m'jaw.