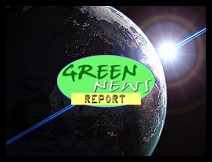 Welcome aboard to our latest new affiliate station - KRXA 540am in beautiful Monterey, CA!

IN TODAY'S AUDIO REPORT: The EPA declares pollution a hazard (duh?)....so Congressional Republicans focus on (wait for it) cow farts!; The 39th celebration of Earth Day; PLUS: tons of toxic drugs pollute the nation's drinking water ... All that and more in today's Green News Report!

Got comments, tips or hate mail? Drop us a line at GreenNews@BradBlog.com or right here at the comments link below. All GNRs are always archived at GreenNews.BradBlog.com.

IN 'GREEN NEWS EXTRA' (links below): The Obama Administation details plans for high-speed rail; Must-see TV this week --- PBS's Frontline investigates poisoned waterways in the U.S., and The History Channel asks what happens to the world after we're gone; will Germany force farmers to use Genetically Modified corn (GMOs)?; Chicago unveils solar-powered recharging stations for electric cars; PLUS: Mars Candy commits to sustainable chocolate...(mmmm chocolate) ....See below for more!

Future Provision of water is also depends on the safety of our water resources. Which are in danger due to pollution caused by industries and other sources. I think you should consider recycling of Industrial water. There many Industrial water treatment consultant including JNB who are providing great services.

Just saw a show on Encore re: the 2004 elections and how they didn't work correctly. The same thing happened in 2008 ...will you help do a show on that? There was massive voter fraud in many states. Especially because of ACORN.

youre the biggest socialist Ive ever read--youre a disgrace to the United States. We have the smallest casualty count of any country--everyone knows muslim extremists place innocent children around suspected and confirmed targets. I pray for you.

Not sure what you're responding to, but comments should be relevant to the post topic.

Also, consider doing some research the definition of "socialist". I do not think the word means what you think it means.

And just to return the favor, you're a disgrace to the United States, too!

Sarah @#3, you're on the wrong thread. Not sure what you're responding to, but comments should be relevant to the post topic.

Also, you've picked up some bad information on the election problems of 2004 and 2008 --- there were many, many problems, but none of them were "voter fraud", the mythological Republican scare-mongering fantasy that is used to pass laws disenfranchising vast numbers of Americans and preventing them from exercising their constitutional right to vote.

Nearly all of those ACORN investigations you seem to be referencing were thrown out of court for lack of evidence.

If you are TRULY interested in election reform and would like factual information, rather than the unfortunate misinformation you've apparently picked up elsewhere (Fox News?), please check out our Special Coverage Page on ACORN in the 2008 election with real live verifiable, documented and sourced facts (meaning you can look it up and verify its validity for yourself --- you should try it sometime!) rather than disinfo and spin.