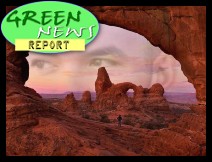 IN TODAY'S AUDIO REPORT: Florida homes stink!; FDA under fire (again); McDonald's may reduce pesticides in fries; PLUS: The cardboard box that could save the world; And the Utah college student indicted for saving public lands from destruction...All that and more in today's Green News Report!

Got comments, tips, college student indictments? Drop us a line at GreenNews@BradBlog.com or right here at the comments link below. All GNRs are always archived at GreenNews.BradBlog.com.

IN 'GREEN NEWS EXTRA' (links below): Alaskan volcano still threatens oil facility; Are America's suburbs in danger of becoming the new slums?; the Oil Price Shock of 2008 may have triggered the current economic downturn; Robert Redford confronts the NIMBY problem in renewable energy sites....See below for more!

Your "green News Reports" just get better and better!

Re: the solar sell back option in Germany: Many States now do the same thing more or less. My State does along with a nominal rebate for the installation of solar panels. I think that this is the way to truly liberate us from energy dependence and needs a lot more rebates as % of cost for the hardware on existing housing and business and State and Federal mandates to install the panels (and rebate the cost) on all new housing and business.

Nice work B & D! I've not had a chance to look closely at yo enviro work till today, but it has the same high standards I expected it would. Keeping talking truth to power, y'all!

I've been saying this for almost a decade now . . .

The gop control an unquestionable 90% the real number may actually be 99%.

There is NO changing the fucking channel for US rational people ... There's only OFF !

... and reid, pelosi and the USELESS dems continue to do SHIT ... Huh nancy
~

Thank you for the kind comments, and for listening!

LottaKatz, and anyone else who owns their home or commercial real estate --- click through the links in Green News Extra to get more info on tax credits, subsidies, and other incentives offered by state and federal governments.

Thanks for covering the Tim DeChristopher story. He's a big hero out here in Utah!

With me too. Brilliant! I'd think he'd have a pretty good "But for" rationale for a motion to dismiss the charges against him: but for the irrational and ill founded actions of placing the parcels up for auction, which was later nullified in major part, he would not have had to resort to the actions he took. That's not to say that the charges against him have much basis to begin with.

Maybe Holder can do something about the charges- though considering the disparity in justice being shown between Stevens and Siegelman/Minor I'm not holding my breath.

Desi, Thanks for reinterating the link in Green News Extra, it's helpful.

Without DeChristopher's brave action, the precious parcels would have been sold for a song and opened to the whims of the oil companies. If we can't save the most precious lands we have from exploitation for a nominal amount of oil to satisfy our present gluttony, we are doomed.

Other then to block further auctions without the proper review, which was ignored by the Bush people, the Obama people have told DeChristoper they will not participate in his defense.

No matter what happens, DeChristopher has earned a place in history, and in the hearts of the environmental movement forever. To tell you the truth, I'm jealous.